Philip Hammond warns against plots to oust May 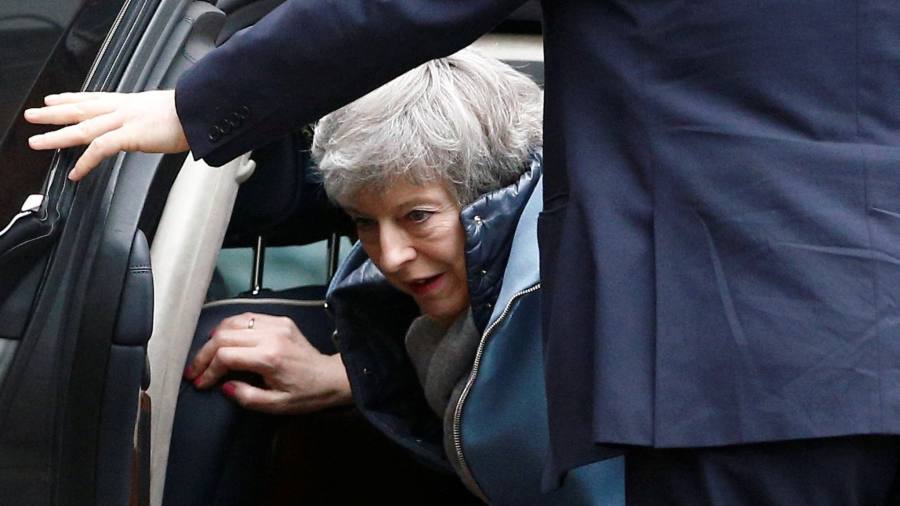 Chancellor Philip Hammond has warned fellow cabinet ministers to stop plotting to oust Theresa May as the British prime minister faces a mounting risk of being replaced by an interim leader to unblock the Brexit process.

Mrs May has this weekend come under pressure to resign, or at least set a timetable for her departure, after a stormy week in which she alienated MPs and was humiliated at a key EU summit.

George Freeman, a Europhile MP and former chair of Mrs May’s policy board, said on Saturday: “I’m afraid it’s all over for the PM . . . We need a new PM who can reach out and build some sort of coalition for a Plan B.” Mrs May has already been told by Graham Brady, chair of the backbench 1922 committee, that Tory MPs want her to step down.

On Sunday morning, Mr Hammond said it would be “self-indulgent” to change the prime minister just weeks before Brexit.

But he did not deny that he had been asked to help topple Mrs May, admitting that “people are very frustrated”. But he told Sky News on Sunday: “Changing prime minister wouldn’t help us . . . We’ve got to address the question of what type of Brexit is acceptable to parliament.”

“If the answer is a caretaker whether it’s Mr Lidington or anybody else . . . what the hell was the question?” he told the BBC’s Andrew Marr Show. Some cabinet ministers “are not fit for their positions if they behave like this” and “should be apologising”, he added.

David Lidington, the de facto deputy prime minister, emerged as the favourite to take over as a caretaker leader. His supporters, including leading Europhiles, argue that he would be able to negotiate a longer delay to Brexit and oversee a process whereby MPs vote on different Brexit options. A donnish 62-year old, Mr Lidington is also seen as unlikely to take part in a subsequent leadership election, making him more palatable to ambitious peers.

However, the Mail on Sunday reported that Eurosceptic cabinet ministers feared Mr Lidington would pave the way to a soft Brexit, and so were rallying around environment secretary Michael Gove.

Yet even Mr Gove, one of the leaders of the official Leave campaign in the 2016 referendum, does not have the confidence of Tory Eurosceptic MPs who have voted against Mrs May’s deal.

The difficulty in agreeing a successor means there is no certainty Mrs May will be ousted. She has survived previous efforts to oust her since the June 2017 general election, and having won a Conservative party confidence vote last year, cannot be officially challenged again until December.

The practical obstacles to removing her remain significant. The UK is due to leave the EU on April 12 or, if parliament approves her withdrawal deal, May 22. “Not liking her is easy,” said one minister. “[But] you can’t have a leadership contest in the middle of all this. If she goes, what then within the timeframe?”

Another Tory MP, who wants Mrs May to quit, said the chances were “high” she would still be prime minister in a week’s time, albeit having “announced that she is going and explained when.”

Monday is set to be a crucial day, with an expected cabinet meeting and a vote in parliament where MPs will decide whether to take control of the House of Commons agenda to debate different Brexit options.

On Friday Mrs May suggested that she would not put her Brexit deal to a third vote in parliament, unless it had “sufficient support” among MPs. Defeat in any such vote could prove another trigger for those plotting to replace her.

Mr Hammond said it was “looking very difficult to bring together a majority” for Mrs May’s deal. Presented with a series of alternatives, he ruled out ever supporting a no-deal Brexit or an immediate revocation of Article 50. But he left open other options, including membership of the customs union and single market, and a second referendum, which he described as a “perfectly coherent proposition”.

Adam Marshall, director of the British Chambers of Commerce, said he was “quite depressed” by reports of a potential coup, because they were “about the who rather than about the what” of Brexit.