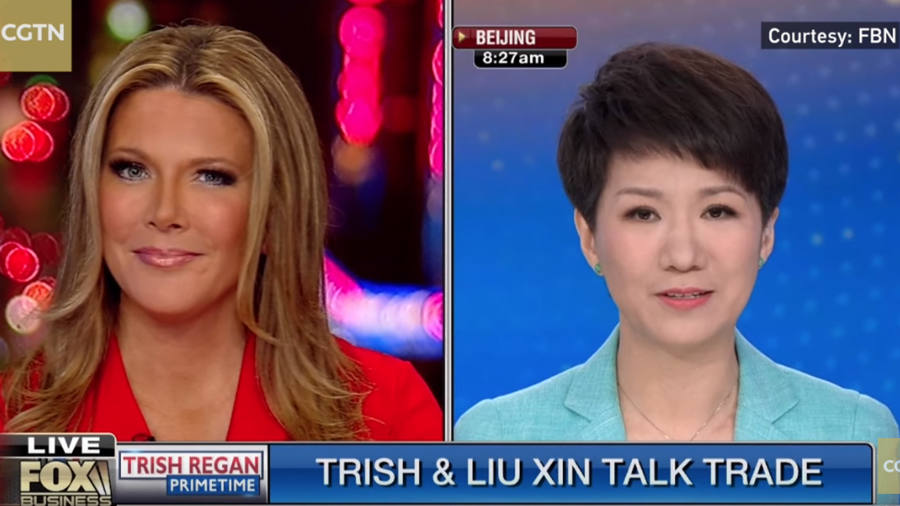 That’s it? A much-anticipated debate about the trade war between a Chinese television host and an American peer left an avid audience in the Asian country underwhelmed and complaining that it was all over far too soon.

The livestream of the debate on the Fox Business Network between Trish Regan and Liu Xin, a journalist for state-run China Global Television Network, repeatedly slowed and pixelated as millions of Chinese logged in to watch.

The debate rose rapidly among hot topics on Weibo, the Chinese equivalent of Twitter, garnering 130m followers on Thursday morning.

Viewers complained that it was over too fast, finishing after 16 minutes of a soft-spoken, polite exchange of views in English. “This is too short. What the hell can you debate about?,” griped one Weibo user. “I have been looking forward to seeing this for so many days.”

Ms Regan challenged Ms Liu to appear on her show after the she posted a detailed rebuttal to a diatribe against China by the US television host earlier this month. CGTN said on Wednesday it was not able to livestream the segment, citing copyright issues with Fox in a move that disappointed the many Chinese who were rooting for Ms Liu.

The debate fed into a hunger in China for more information on a clash that threatens to dismantle years of integration between the world’s two biggest economies. “Chinese college students care a lot about current affairs and they spend a lot of time discussing these issues,” said a recent graduate, who identified himself only as Jack.

It was very peaceful. There’s no smell of gunpowder

Trade talks between the US and China broke down this month, triggering a broadside of articles in China’s state-run media against US “bullying. In addition to raising tariffs, the US has put Huawei, the Chinese telecoms group, on a blacklist that prevents US companies from providing it with components or services, threatening to cripple a company seen as a national champion by Beijing.

The trade war has also unleashed a tug of war on the Chinese internet, between nationalists defending their country’s pride and those who feel Beijing’s propaganda is too heavy-handed.

For the most part, the two anchors rehashed their countries’ positions: Ms Regan pushed on allegations of Chinese intellectual property theft and Ms Liu argued for open trade and investment into China. Ms Liu acknowledged some IP violations but pointed out that US companies sue each other over such claims too.

Both women agreed that lower tariffs would be preferable to the current situation. The US has slapped tariffs on $250bn of Chinese imports and Beijing has retaliated with its own levies.

“It was very peaceful. There’s no smell of gunpowder as expected,” well-known blogger Guda Baihua told his 12m followers on Weibo, with a hint of disappointment.