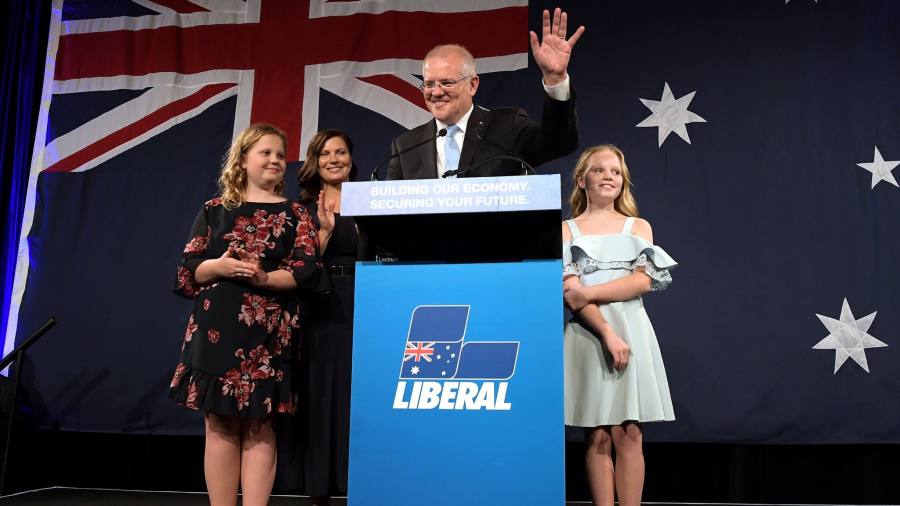 Australia’s conservative government is on course to score a surprise victory in Saturday’s knife-edge election, which the opposition Labor party had been hotly tipped to win by pollsters.

With more than two-thirds of votes counted Australia’s state broadcaster ABC predicts the Liberal-National coalition will win enough seats in the 151-member House of Representatives to form at least a minority government. The final result will not be known until vote counting is completed in coming days but Labor leader Bill Shorten conceded defeat late on Saturday and announced he would resign as party leader.

Scott Morrison, Australia’s prime minister, said his government would go back to work for the people of Australia and advance policies to keep the economy strong and people safe.

“I have always believed in miracles . . . and tonight we’ve been delivered another one. How good is Australia? And how good are Australians?” he told supporters at a post election event.”

The coalition is set to win at least 74 seats, Labor 65 seats, the Green Party one seat, and independents five seats. A further six seats remain in doubt, according to ABC computer predictions. The coalition claimed 50.7 per cent of the popular vote, compared to 49.3 per cent for Labor on a two-party preferred basis.

Victory for the coalition confounded pollsters, who had been predicting Labor would win enough seats to re-enter government for the first time since 2013. The result marks a remarkable success for Mr Morrison, the 51-year-old Liberal leader who became prime minister in August when party members ousted Malcolm Turnbull following a bruising leadership contest.

“If there is a coalition win or even a hung parliament it represents a historic win for Scott Morrison, who most commentators had written off following his replacement of Malcom Turnbull and a dive in the polls,” said Ian McAllister, professor of politics at Australian National University.

He said opinion polls appear to have got the election badly wrong, which could reflect methodological problems, a late swing or people not giving their real vote information to pollsters.

“Remember the ‘shy Tories’ theory in the UK during Thatcher,” said Mr McAllister, in a reference to UK voters who are coy about confessing their voting intentions to pollsters.

The defeat is a bitter blow for Mr Shorten, who has spent six years as opposition leader and played an important role in uniting the Labor party after several years of internal wrangling when they were in government between 2007 and 2013. He told supporters at the party’s post election function that it was now obvious Labor would not be in a position to form government and he had phoned Mr Morrison to concede defeat.

“All of us have a responsibility to respect the result, respect the wishes of the Australian people and to bring our nation together,” said Mr Morrison.