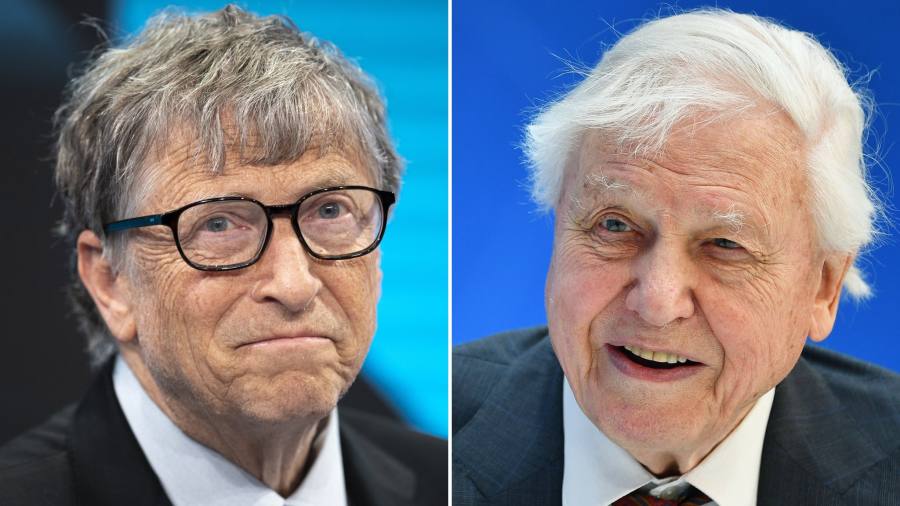 Are we in the best of times? Or the end of times? One of the oddities of the current era is that extreme pessimism about the world coexists with extreme optimism — and both have a plausible case to make.

The two views are epitomised by David Attenborough and Bill Gates, two charismatic figures whom I met on the same day, earlier this year. (Reader, forgive me, it was at Davos.)

Sir David, now in his nineties, is using his position as one of the world’s most famous broadcasters to sound the alarm about looming environmental catastrophe. In a recent BBC programme, Climate Change: The Facts, he argued that without dramatic action, humanity “faces a devastating future”.

Sir David highlights not just climate change but a whole array of unfolding environmental disasters, such as the pollution of the oceans and the extinction of species.

Mr Gates, by contrast, is a determined optimist. In a recent interview with the MIT Technology Review, he argued that “the big picture is that it’s better to be born today than ever, and it will be better to be born 20 years from now than today.” To back up his case, Mr Gates can point to an array of good news. In 1990, nearly 36 per cent of the world’s population lived in extreme poverty; but by 2015 that number had fallen to 10 per cent. Child mortality rates have also plummeted over the same period.

So who is right? Mr Gates or Sir David? The optimists or the pessimists?

Part of the answer is that the two men are looking at different things. Mr Gates is concentrating on human welfare, while Sir David’s priority is the wider natural world. It is a bleak fact that throughout history massive advances in human welfare have gone hand in hand with the eradication of other species — from the woolly mammoth to the sabre-toothed tiger.

As Yuval Noah Harari puts it in his book, Sapiens: “The historical record makes Homo Sapiens look like an ecological serial killer.”

Humankind’s eradication of other species is now proceeding apace, with the numbers of lions, tigers, elephants and rhinos living in the wild plummeting in recent decades. But, while many people will be horrified by the disappearance of these animals from the wild, their loss will not necessarily prevent human flourishing. On the contrary, the disappearance of natural habitats for wildlife reflects the relentless expansion of humans, with the population of Africa alone set to double by 2050.

The response of environmentalists such as Sir David, however, is that we are now at the stage where human welfare is intimately connected with the preservation of the environment. The melting of the polar ice caps is not just bad news for polar bears. It will also mean higher sea-levels that could flood coastal cities. And if you chop down more of the Amazon to make way for soyabeans or cattle, you will accelerate global warming, leading to desertification and mass population movements.

There are some professional optimists, such as Matt Ridley, author of The Rational Optimist, who have consistently challenged both the extent and the dangers of climate change. But Mr Gates does not belong to this camp. He takes climate change seriously enough to have contributed generously to a $1bn fund for new scientific research into alternative energy.

What is less clear is whether Mr Gates is genuinely optimistic that technological advances will come rapidly enough to head off disaster. A recent UN report argued that the world needs to reduce greenhouse gas emissions by more than 20 per cent by 2030, if it is to limit temperature change to under 2C more than pre-industrial levels — a level that is widely deemed to be unacceptably dangerous. But Mr Gates believes that things could get much worse than that, arguing recently that, “If we freeze ­technology today, we will live in a 4C warmer world in the future — guaranteed”.

The trouble is that the technological advances needed to avoid significant warming will have to come implausibly fast. The world’s greenhouse gas emissions have gone up every year, bar one, since 2010 and are currently 12 per cent higher than they were a decade ago. Stopping that rise and then reversing it in just a decade, as the UN demands, seems unlikely.

But does that necessarily spell disaster? Sir David fears the worst, warning of the possibility of the “collapse of our societies”, unless climate change is halted. Mr Gates is worried enough to have accepted the co-chairmanship of the Global Commission on Adaptation, (alongside Kristalina Georgieva, the chief executive of the World Bank), which aims to mitigate the effects of climate change on the world’s poorest people. But he avoids speculating about the worst scenarios in public, preferring to accentuate the positive — such as the “ingenious inventors who are tackling climate change”.

So who is right? I suspect that Mr Gates is correct to believe that technological advances can eventually solve or mitigate many of the problems caused by climate change. But I am afraid that Sir David is right to fear that these technological breakthroughs will come too late to prevent tragic damage to the natural world. The unresolved question is whether change will come fast enough to protect humanity itself.